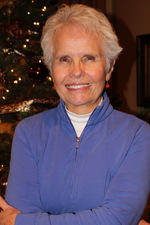 Kathryn Roberts McKell of Provo, died on November 8, 2019, at the age of 72. She was diagnosed with metastatic small cell lung cancer in November of 2018. At this time she was given two very valuable suggestions: to take the good from a bad situation and to look for blessings other than blessings of healing. She took these suggestions to heart, and her life was filled with a heightened awareness and gratitude for her surroundings, for daily experiences, and the people in her life. She’s had the time and opportunity to review and evaluate her 72 years. They have been filled with mistakes, challenges, and wonderful people, all of which have blessed her and helped her to learn and grow.

She was born August 29, 1947, in Fillmore, Utah to George Ralph and Clea Stott Roberts. She had two older brothers and two years later a third brother was added to the family. Kathryn spent her early years in Meadow, Utah, and moved to Orem at the age of 8. She attended Hillcrest and Spencer Elementary, Lincoln Jr. High, and graduated from Orem High School in 1965. She attended BYU for two years.

She married John Wayne King in 1967. Upon his graduation from BYU, they made their home in Illinois, living in Arlington Heights, Chicago, Lisle, and Naperville. She graduated from Northeastern Illinois University in 1972, and taught school at Thomas Scanlon Elementary in Chicago for four years. Kathryn and Wayne had two sons, Zachary, born in Provo, UT., and Benjamin, born in Arlington Heights, IL. They later divorced in 1978 and both moved back to Utah, sharing custody of their sons.

Kathryn married Gerald David McKell, Jr. in 1978, and gradually became a second mother to his children, Mark, Scott, Anne, John, and Kristen. They were all blessed with the birth of their son Joshua in 1981. She and Dave enjoyed recreating with their children and grandchildren by camping, boating, and off road motorcycling, as well as supporting them in their sports, performing arts, and other activities.

Kathryn was blessed with friends and neighbors with whom she enjoyed a variety of physical activities such as aerobics, yoga, walking, hiking, climbing mountains, and running, along with luncheons, book groups, and cultural activities. She enjoyed working in her yard and garden and making memory and photo books.

She became reactivated in the Church of Jesus Christ of Latter-day Saints and enjoyed serving in a variety of positions in the auxiliaries of the church. Kathryn and Dave served a mission together in the Santo Domingo East Mission in the Dominican Republic from July of 2001 thru December of 2002. They both loved the Dominican people and the missionaries with whom they served. Kathryn also enjoyed serving in the sealing office of the Provo Temple from 2004 to 2018.

Kathryn is survived by her husband David McKell, and their eight children and spouses, Mark David and Lisa Whitaker McKell of Orem, Scott Romney and Tonya Finlayson McKell of Provo, Anne Margaret McKell and B. Todd Bailey of Nampa, ID, John Swensen and DeAnna Furriman McKell of Lindon, Zachary Wayne and Jennifer Wagner King of Mission Viejo, CA, Kristen McKell and John Longfellow Strong of Salem, Benjamin John and Stacie Mickel King of Valencia, CA, and Joshua David and Mallory Wing McKell of Vineyard. Together they have 31 grandchildren, and 12 great grandchildren. Kathryn is also survived by her brothers and sisters-in-law Stephen George and Jayne Hacking Roberts of Woodland Hills, UT, Dean Stott and Linda Lee Berry Roberts of Provo, and Ronald Clee and Janice Fowler Roberts of Charlotte, NC, as well as brother and sister-in-law Paul Heins of Albany, OR and his wife Jean McKell Heins of Eagle Mountain, along with many nieces and nephews, and grand nieces and nephews. Kathryn was preceded in death by her parents and brother-in-law and sister-in-law Howard and Ann McKell Millard of CA. She has loved and been loved by a multitude of wonderful people.

All rights reserved. This obituary is also archived at obittree.com